ARTICLE - Mary and Alex Montagu: It's a title fight


The comments of mother and son are well worth reading and keeping in mind at this, the death of a close relative.  To facilitate your reading pleasure these comments have been rekeyed.  TEXT


Mary and Alexander: It's a title fight

Should one address the woman who answers the phone at St. Kilda Police Traffic Operations Group as Mary, Duchess of Manchester – or simply as Mary, Lady Angus Montagu?


Mary opts for the former.


The confusion has arisen with the death on Monday of the 11th Duke of Manchester.


He left no heirs, which meant that the title passed to his brother, Lord Angus Montagu, the husband of Mary until they divorced in 1970.


The 12th duke, who is awaiting trial in London's Old Bailey on a deception charge, has since remarried and divorced.


Phoned at the Traffic Operations Group yesterday, Mary said: “You're very funny. I'm not talking to nobody.”


Asked to explain the apparent conflict, Mary said she had been told by her solicitor that she was entitled to assume the title Mary, Duchess of Manchester, despite the fact that she now bears no legal relationship to the new duke.


Later, Alexander, 28, the eldest son of Mary and Angus and now, because of the changed succession, the Viscount of Mandeville, phoned to say that he did not believe his mother was entitled to call herself “duchess”.


“My father rang me today to say that my mother is millions to nothing to get a title.


“I'm the one who'll have the big multi-million dollar ranch and who'll be sitting back in a rocking chair. My brother and sister won't even get a title.”


Alexander said his father had offered him three first class airfares to the United States – for himself, his Frankston girlfriend (he said they plan to marry when his divorce is completed) and her son.


“My father said he wants me by his side,” he said.


Substantially, the man from the Times seemed to agree with Alexander.


“The title Lord Angus Montaguy was purely a courtesy one because Angus's brother was the duke,” Baldwin (a distant relative of the famous Stanley Baldwin) said.


“That makes Mary, Lady Montagu's title a reflection of a reflection. She has no rights of her own. She would not become Mary, Duchess of Manchester.


“The eldest son, Alexander, is now a viscount. He has moved up a bit.


“The other two children (Kimble, 21, and Emma, 20) have become Lord Kimble Montagu and Lady Emma Montagu.


“Again, these are courtesy titles. They carry no privileges.”


In response, Mary said, “I just think it's all boring, anyway. I don't want to know about any of it, it's just boring.


“I've been driven crazy in the last day with overseas phone calls. And, of course, there's Angus's little problem.


“I only know what I've been told – and, as the mother of the future duke, if the Queen was in residence in Government House, I would outrank the Governor.”


Asked what the mother of a future Duke was doing answering the phone at a police station, Mary said that she was helping out a friend.


Asked what she did these days for a living, she replied, “Nothing.”.


And slammed down the phone. 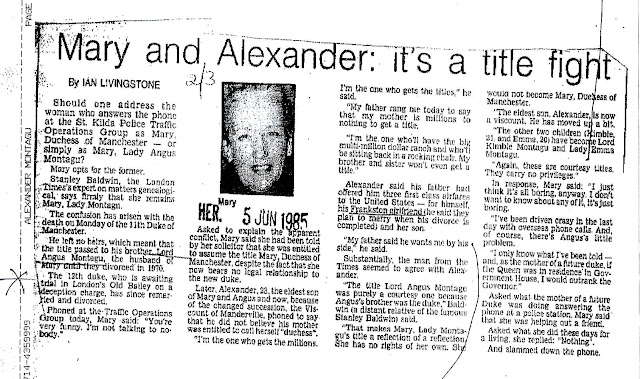 Posted by Melinda Pillsbury-Foster at 9:28 AM